- fishing and adventure at the Arctic Circle

The main feature of the trip is the arctic char, which populates the entire Arctic region. The arctic char is part of the char family and also carries the Latin name Salvelinus alpinus. In Greenland they call it eqaluk.

The wild arctic char spends winters in the lakes only to come out to the sea in early spring. In the summer months it rises up from the sea to spawn in the rivers. During the season it replaces its shiny silvery hue with the characteristic splendid orange, red and green spawning suit.

The Arctic char has been called “most variable vertebrate on Earth” because it comes in many morphological variants. Fishing for the rainbow colored Arctic char is possible throughout July and August, walking 1,5 hours up the river from the camp. Fishing for smaller Arctic char, migration up the river just at the camp, is possible from end of June to mid August. The times can be dependent on weather and change in seasons.

The arctic char is a tremendous fighter, much stronger than trout seen elsewhere. So do look forward to a challenge and world-class angling!

Recreational fishing has to be done using hooks without barbs. You may only take the fish you can eat on the trip, and all living catches must be released again.

In Greenland the arctic char is a crucial source of nutrition. From July 15th to August 15th you can witness/learn the traditional ways of smoking, salting, and drying the arctic char at the fishing grounds. You can also join fishing expeditions with traps and nets. This time of year you even have a chance to glimpse the thousands of trout jumping through the cascades to continue their journey upriver.

In Greenland, fishing and hunting comes in many forms and have been the basis of life since the first people settled here. We are happy to also offer sea fishing from our boat, where we catch halibut, cod, salmon and catfish. If the conditions allow us, we can go longline fishing for halibut, which is a traditional greenlandic method that is still used for sustainable fishing.

The area is amazing for reindeer hunting, and like fishing, this has been part of our life for generations.

West Greenland Wildlife has exclusive right to a river at the Polar Circle. We travel in small groups and have the whole area to ourselves.

Read more about our trips 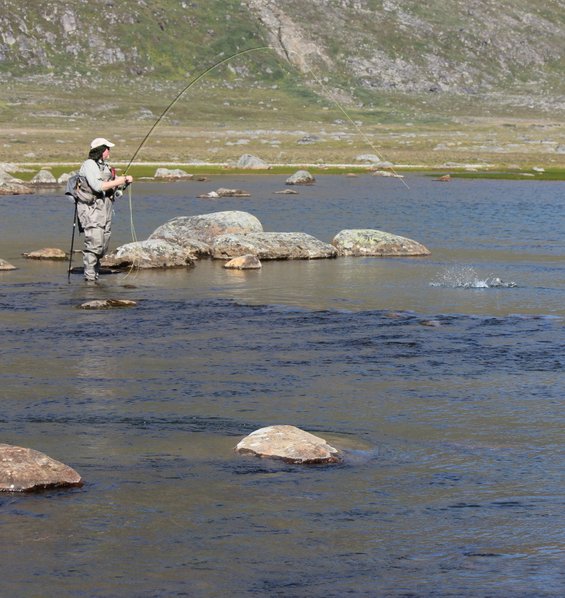